Understanding d3 v4 ZoomBehavior in the Pan and Zoom Minimap

It has been a while since I posted any new articles.  I’ve been working  non-stop with Angular 4 (formerly Angular 2), Typescript, RxJS and d3 v4.   I recently needed to add a minimap for a visualization and I decided to update my old minimap demo to make us of d3 version 4.  While researching the updates to the zooming behavior, I came across this post on GitHub where another developer user was trying to do the same thing (funny enough, also using my previous example).  After reading Mike’s response about cross-linking the zoom listeners, I decided to give it a try.   While implementing his suggestion, I learned quite a bit about how the new and improved zoom functionality works and I wanted to share that in this post.

My previous example did not make good use of the capabilities of d3’s ZoomBehavior.  I was manually updating the transforms for the elements based on zoom events as well as directly inspecting the attributes of related elements.  With the latest updates to d3 v4, creating this type of minimap functionality ended being really simple and I was able to remove a lot of code from the old demo.  I found that, while the release notes and the docs for the zoom feature are helpful, actually reading through the source is also enlightening.  I was eventually able to boil it down to some basic bullet points. 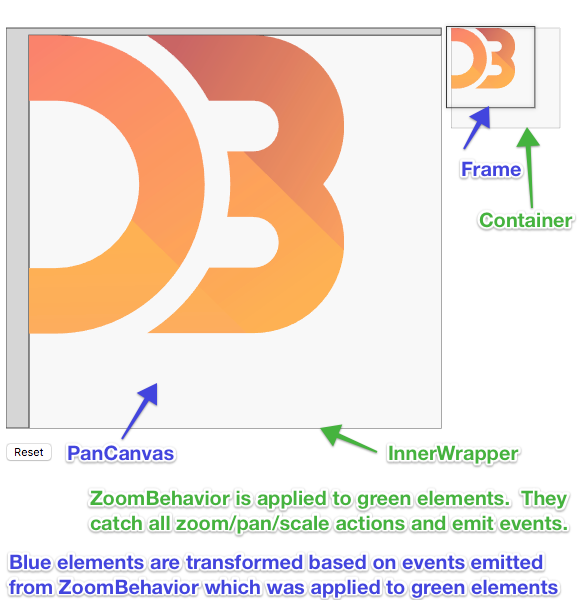 So the end result is a “push me/pull you” type of action.  Each side makes its own updates and, if necessary, tells the counterpart about those updates.  A few other things to point out:

At this point, the design works.  However, there’s another problem waiting for us:

So here is the final interaction:

Hopefully this will save you some time and help you understand how the d3 v4 ZoomBehavior can be used for functionality such as this demo.  🙂

Iconic One Theme | Powered by Wordpress